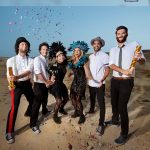 The Electric Swing Circus have become an annual fixture at the Twinwood Festival. They deliver an exciting and vibrant sound that hits the spot every time. The arena is always packed with an adoring crowd who would definitely lynch me if I didn't have them back every year! [David Wooding -  Director of Twinwood Events Limited]

The Electric Swing Circus is a 6-piece fusion of classy 20’s swing and stomping electro beats. With an explosive sound that reverberates back through time, them with their own unique style of swing the ESC always brings the party!

Rocking stages at festivals and events across the UK, Europe, Australia and New Zealand, the ESC have travelled the world and earned themselves a reputation for stunning high energy live shows. There is nothing quite like the ESC on stage, in full costume the band looks great, sounds great and they keep the stage jumping until the curtain falls. With main stage shows at festivals like Boomtown and Shambala, as well as the Avalon stage headline set at Glastonbury 2015, the band have shown they get the crowd moving at any time of day or night.

The new album, “It Flew By”, shows a real development of the ESC sound, with catchy songs, thundering bass lines and soaring vocals. The process has taken almost two years to experiment with the recording process, and discover how best to capture the energy from the live show and translate it onto the record and we are really excited to share the music with the world. Produced by James Bragg (the Skints, Gengah, Dry the River) and recorded between Middle Farm Studios in Devon and Giant Wafer in Wales.

This website uses cookies to improve your experience while you navigate through the website. Out of these cookies, the cookies that are categorized as necessary are stored on your browser as they are essential for the working of basic functionalities of the website. We also use third-party cookies that help us analyze and understand how you use this website. These cookies will be stored in your browser only with your consent. You also have the option to opt-out of these cookies. But opting out of some of these cookies may have an effect on your browsing experience.
Necessary Sempre abilitato
Necessary cookies are absolutely essential for the website to function properly. This category only includes cookies that ensures basic functionalities and security features of the website. These cookies do not store any personal information.
Non-necessary
Any cookies that may not be particularly necessary for the website to function and is used specifically to collect user personal data via analytics, ads, other embedded contents are termed as non-necessary cookies. It is mandatory to procure user consent prior to running these cookies on your website.
ACCETTA E SALVA